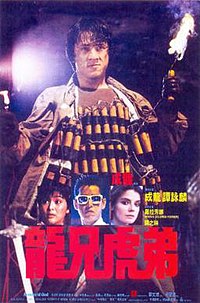 Armour of God (; also known as Operation Condor 2: The Armour of the Gods in the United States) is a 1986 Hong Kong action-comedy film written and directed by Jackie Chan, who also starred in the film. The film co-stars Alan Tam, Lola Forner and Rosamund Kwan.

Jackie, a.k.a. "Asian Hawk", is a former musician who becomes an adventurer and treasure hunter. After successfully stealing a sword from an African tribe, he has the weapon auctioned before it is won by May Bannon, the beautiful daughter of Count Bannon. He is reunited with his former bandmate Alan, who seeks his help as his girlfriend Lorelei has been kidnapped by an evil religious cult as a means of acquiring Jackie's services. The cult possesses two pieces of a legendary armour called the "Armour of God", and they intend to have Jackie bring them the three remaining armour pieces, including the sword. Jackie and Alan strike a deal with Count Bannon, who is in possession of the three armour pieces: they will borrow the armour pieces for their quest to rescue Lorelei with a promise to complete the armour for the Count, on the condition that May accompanies them.