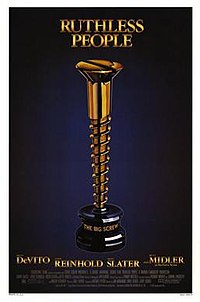 Millionaire Sam Stone (Danny DeVito) hates his wife Barbara (Bette Midler). He plans on murdering her to gain control of her $15 million family fortune and run off with his mistress Carol (Anita Morris). He goes home to murder his wife, but he can't find her. The phone rings and an anonymous man tells him that Barbara has been kidnapped and if Sam informs the media or the police, or if any of their detailed demands are not met, they will kill his wife.