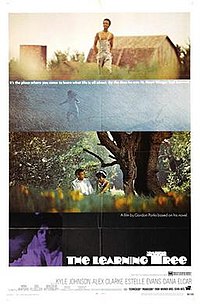 The Learning Tree is a 1969 American coming-of-age drama film written and directed by Gordon Parks, a celebrated photographer. It depicts the life of Newt Winger, a teenager growing up in Cherokee Flats, Kansas in the 1920s, and chronicles his journey into manhood marked with tragic events. Based on Parks' 1963 semi-autobiographical novel of the same name, The Learning Tree was the first film directed by an African-American person for a major American film studio, in this case Warner Bros.-Seven Arts.

Newt Winger, Marcus Savage, and several of their friends steal apples from Jake Kiner's orchard, and when Kiner confronts the boys, he is beaten and left for dead by Marcus, who is later sent to jail for his actions. While Marcus is in jail, Newt begins to work for Kiner to make up for his actions and those of his friends, and also begins a relationship with the new girl in town Arcella Jefferson, but his relationship with her is ultimately destroyed when Chauncey Cavanaugh, a white man and son of the local judge, rapes and impregnates Arcella, who ultimately moves away out of shame. Another scene also shows Newt forced into a brutal boxing match at the County fair.