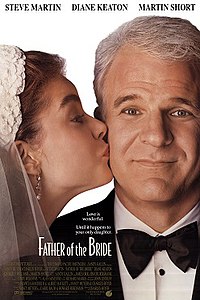 Father of the Bride is a 1991 American comedy film starring Steve Martin, Diane Keaton, Kimberly Williams (in her film debut), George Newbern, Martin Short, B. D. Wong, and Kieran Culkin. It is a remake of the 1950 film of the same name. Martin portrays George Banks, a businessman and owner of an athletic shoe company (called Side Kicks), who, when he finds out his daughter is getting married, does not want to give her away.

George Banks is the owner of a successful athletic shoe company called Side Kicks in San Marino, California. George narrates what he had to go through with his daughter's wedding. His 22-year-old daughter Annie, freshly graduated from college, returns home from Europe and announces that she is engaged to Bryan MacKenzie, despite their only having known each other for three months. The sudden shock turns the warm reunion into a heated argument between George and Annie, but they quickly reconcile in time for Bryan to arrive and meet them. Despite Bryan's good financial status and likeable demeanor, George takes an immediate dislike to him while his wife, Nina, accepts him as a potential son-in-law. George does not want to let go of his daughter.