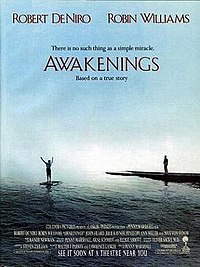 Awakenings is a 1990 American drama film directed by Penny Marshall. It is written by Steven Zaillian, who based his screenplay on Oliver Sacks's 1973 memoir Awakenings. It tells the story of neurologist Dr. Malcolm Sayer (Robin Williams), who is based on Sacks, who discovers the beneficial effects of the drug L-Dopa in 1969. He administers it to catatonic patients who survived the 1917–1928 epidemic of encephalitis lethargica. Leonard Lowe (Robert de Niro) and the rest of the patients are awakened after decades and have to deal with a new life in a new time. Julie Kavner, Ruth Nelson, John Heard, Penelope Ann Miller, Peter Stormare, and Max von Sydow also star.

In 1969, Dr. Malcolm Sayer is a dedicated and caring physician at a local hospital in the Bronx borough of New York City. After working extensively with the catatonic patients who survived the 1917–1928 epidemic of encephalitis lethargica, Sayer discovers certain stimuli will reach beyond the patients' respective catatonic states; actions such as catching a ball, hearing familiar music, being called by their name, and enjoying human touch, all have unique effects on particular patients and offer a glimpse into their worlds. Patient Leonard Lowe seems to remain unmoved, but Sayer learns that Leonard is able to communicate with him by using a Ouija board.