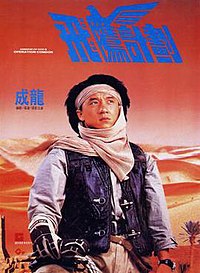 Armour of God II: Operation Condor (; also known as Operation Condor in the United States and as Superfly in the Philippines) is a 1991 Hong Kong action-comedy film written and directed by Jackie Chan, who also starred in the film. It is the sequel to 1986's Armour of God.

Hong Kong treasure hunter Jackie, a.k.a. "Asian Condor", is summoned by Baron Bannon at his mansion in Madrid, Spain, where he is told of a story of a German commander named Hans von Ketterling and his regiment burying 240 tons of gold at a secret base deep in the Sahara Desert in Africa before the end of World War II. The 18 soldiers involved in the operation disappeared under mysterious circumstances. By request from the United Nations, Bannon gives Jackie an unofficial mission to locate the base and recover the gold. Aside from acquiring the key to the base, he is partnered with Ada, an expert in African geography. Upon discovery of the gold, Jackie is promised one percent of the treasure, or roughly 2.5 tons of gold.