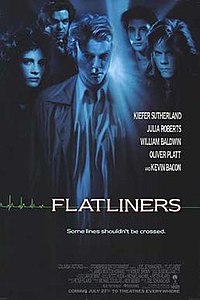 Flatliners is a 1990 American psychological horror film directed by Joel Schumacher, produced by Michael Douglas and Rick Bieber, and written by Peter Filardi. It stars Kiefer Sutherland, Julia Roberts, William Baldwin, Oliver Platt, and Kevin Bacon. The film is about five medical students who attempt to find out what lies beyond death by conducting clandestine experiments that produce near-death experiences. The film was shot on the campus of Loyola University (Chicago) between October 1989 and January 1990, and was nominated for an Academy Award for Best Sound Editing in 1990 (Charles L. Campbell and Richard C. Franklin). The film was theatrically released on August 10, 1990, by Columbia Pictures. It grossed $61 million at the box office.

Nelson Wright, a medical student, walks onto a beach one day and proclaims “today is a good day to die”. He later convinces four of his medical school classmates—Joe Hurley, David Labraccio, Randy Steckle, and Rachel Manus—to help him discover what lies beyond death. Nelson flatlines for one minute before his classmates resuscitate him. While "dead", he experiences a sort of afterlife. He sees a vision of a boy he bullied as a child, Billy Mahoney. He merely tells his friends that he cannot describe what he saw, but something is there. The others follow Nelson's daring feat.