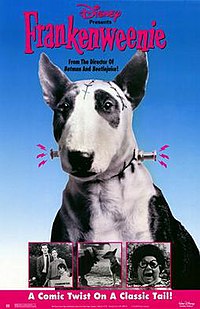 Frankenweenie is a 1984 short film directed by Tim Burton and co-written by Burton with Leonard Ripps. It is both a parody and homage to the 1931 film Frankenstein based on Mary Shelley's novel of the same name. Burton later directed a feature-length stop-motion animated remake, released in 2012.

Victor Frankenstein (played by Barret Oliver) is a young boy who creates movies starring his dog, Sparky (a Bull Terrier, whose name is a reference to the use of electricity in the film). After Sparky is hit by a car and killed, Victor learns at school about electrical impulses in muscles and is inspired to bring his pet back to life. He creates elaborate machines which bring down a bolt of lightning that revives the dog. Victor is pleased, but when the Frankensteins decide to introduce the revitalized Sparky to his neighbors, they become angry and terrified.