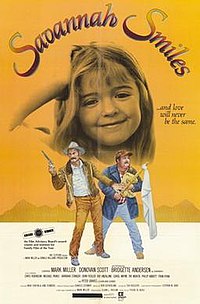 Savannah Smiles is a 1982 family film written and produced by Mark Miller. Miller also played one of the male leads in the movie. The film was directed by Pierre De Moro, and starred Bridgette Andersen as the title character, with Mark Miller and Donovan Scott as the two vagabonds who befriend her.

Six-year-old Savannah's father is running for the United States Senate. Because Savannah's parents pay no attention to her, she decides to run away, leaving a note before she flees. Unfortunately, her father, fearing the note may hurt his chances of winning the election, burns it and admonishes the maid not to tell anyone. When her aunt picks her up and they go to the park, Savannah switches cars and ends up with two escaped (and incompetent) convicts, Alvie and Boots. The convicts take her in and soon discover that her father has posted a reward of $100,000 for her safe return. Unexpectedly, they grow close to her, and Savannah finds the love and attention she always wanted. The convicts arrange to return her, with the help of the family priest, but she becomes lost in the mountains. The convicts refuse the opportunity to escape in order to search for her and bring her back safely, ultimately surrendering to the priest and the police.