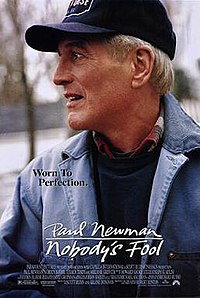 Nobody's Fool is a 1995 American comedy-drama film based on the 1993 novel of the same name by Richard Russo. The film was written for the screen and directed by Robert Benton and stars Paul Newman, Jessica Tandy, Bruce Willis, Melanie Griffith, Dylan Walsh, Pruitt Taylor Vince, Gene Saks, Josef Sommer, Philip Seymour Hoffman, and Philip Bosco. It was Paramount's final production under its Paramount Communications ownership (being sold to the original Viacom in July 1994) and Jessica Tandy's final produced film before her death on September 11, 1994.

Donald "Sully" Sullivan (Newman) is a worn yet spry hustler living in the peaceful, snowy northern New York state village of North Bath. He free-lances in the construction business, usually with his dim-witted friend Rub (Vince) by his side. He is often at odds with Carl Roebuck (Willis), a local contractor, suing him at every opportunity for unpaid wages and disability. Sully's one-legged lawyer Wirf (Saks) is inept, and his lawsuits are repeatedly dismissed. As a way to irritate him, Sully flirts with Carl's wife Toby (Griffith) openly at every opportunity (which she enjoys). He is a regular at the Iron Horse Saloon, where he often has drinks and plays cards with Wirf, Carl, Rub, Jocko the town pharmacist and Ollie Quinn, the town's Chief of Police.