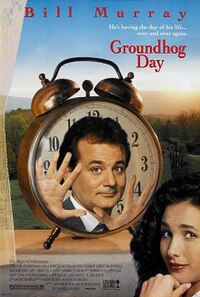 On February 1, TV weatherman Phil Connors reassures his Pittsburgh viewers that an approaching blizzard will miss Western Pennsylvania. Alongside his producer Rita Hanson and cameraman Larry, Phil travels to Punxsutawney for his annual coverage of the Groundhog Day festivities. Phil makes no secret of his contempt for the assignment, the small town, and the "hicks" who live there, asserting that he will soon be leaving his station for a new job.