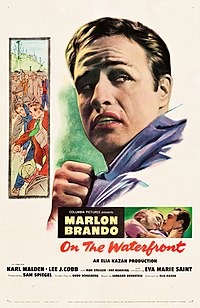 On the Waterfront is a 1954 American crime drama film, directed by Elia Kazan and written by Budd Schulberg. It stars Marlon Brando and features Karl Malden, Lee J. Cobb, Rod Steiger, Pat Henning, and Eva Marie Saint in her film debut. The musical score was composed by Leonard Bernstein. The film was suggested by "Crime on the Waterfront" by Malcolm Johnson, a series of articles published in November–December 1948 in the New York Sun which won the 1949 Pulitzer Prize for Local Reporting, but the screenplay by Budd Schulberg is directly based on his own original story. The film focuses on union violence and corruption amongst longshoremen, while detailing widespread corruption, extortion, and racketeering on the waterfronts of Hoboken, New Jersey.

Mob-connected union boss Johnny Friendly (Lee J. Cobb) gloats about his iron-fisted control of the waterfront. The police and the Waterfront Crime Commission know that Friendly is behind a number of murders, but witnesses play "D and D" ("deaf and dumb"), accepting their subservient position, rather than risking the danger and shame of informing.