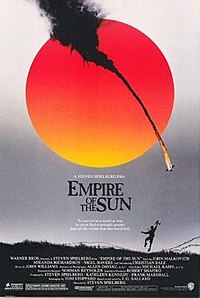 Empire of the Sun is a 1987 American epic coming-of-age war film directed by Steven Spielberg and written by Tom Stoppard, based on J. G. Ballard's semi-autobiographical 1984 novel of the same name. The film tells the story of Jamie "Jim" Graham (Christian Bale), a young boy who goes from living with his wealthy British family in Shanghai to becoming a prisoner of war in a Japanese internment camp during World War II.

Amid Japan's invasion of China during World War II, Jamie "Jim" Graham is a British upper middle class schoolboy enjoying a privileged life in the Shanghai International Settlement. After the attack on Pearl Harbor, Japan begins occupying the settlement. As the Graham family evacuate the city, Jamie is separated from his parents in the ensuing chaos. Jamie makes his way back to their house, assuming they will return. After a length of time alone and having eaten the little remaining food, he ventures back into the city.