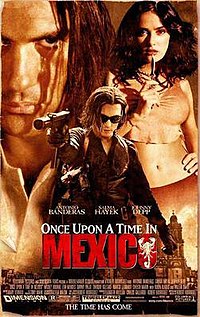 Once Upon a Time in Mexico (also known as Desperado 2) is a 2003 American neo-Western action film written, directed, produced, photographed, scored, and edited by Robert Rodriguez. It is the third and final film in Rodriguez's Mexico Trilogy, and it is a sequel to 1992's El Mariachi and 1995's Desperado. The film features Antonio Banderas in his second and final performance as El Mariachi. In the film, El Mariachi is recruited by CIA agent Sheldon Sands (Johnny Depp) to kill a corrupt general responsible for the death of his wife, Carolina (Salma Hayek).

El Mariachi is recruited by CIA officer Sheldon Jeffrey Sands to kill General Emiliano Marquez, a corrupt Mexican Army officer who has been hired by Mexican drug lord Armando Barillo to assassinate the President of Mexico and overthrow the government during a period of unrest in Culiacán (the capital of Sinaloa) which is testing the presidency. Many years before, El Mariachi and his wife Carolina confronted Marquez in a shootout and wounded the general; in retaliation, Marquez took the lives of Carolina and their daughter in an ambush. In addition to El Mariachi, Sands persuades former FBI agent Jorge Ramírez to come out of retirement and kill Barillo, who had murdered his partner Archuleta in the past. Furthermore, AFN operative Ajedrez is assigned by Sands to tail Barillo.