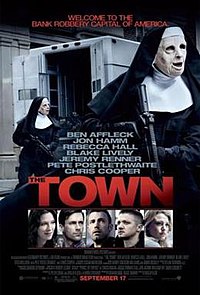 Four lifelong friends from the Boston neighborhood of Charlestown, Douglas "Doug" MacRay, James "Jem" Coughlin, Albert "Gloansy" MacGloan, and Desmond "Dez" Elden, rob a bank. They take the assistant manager, Claire Keesey, hostage, but release her unharmed. When they find out Claire lives in their neighborhood, Doug begins to follow her to find out how much she has told the police, and to make sure that Jem does not eliminate her as a witness. Soon a romance grows between them, which Doug hides from the gang. As they grow closer, Doug tells Claire of his search for his long-lost mother, who he believes went to live with his aunt in Tangerine, Florida. He also recounts his chance to be a professional hockey player which he threw away for a life of crime, following in his father's footsteps. She in turn tells Doug that she saw a tattoo on one of the robbers, and he realizes that she can identify Jem and send them all to prison. He knows that Jem will kill her if he discovers the truth, so in order to discourage her, he advises her to tell the police, and tells her that the authorities will then put her in witness protection and send her to live in another state. His plan works, and she decides not to tell the police.