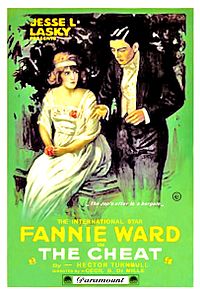 Edith Hardy is a spoiled society woman who continues to buy expensive clothes even when her husband, Richard, tells her all his money is sunk into a stock speculation and he can't pay her bills until the stock goes up. She even delays paying her maid her wages, and the embarrassed Richard must do so. Edith is also the treasurer of the local Red Cross fund drive for Belgian refugees, which holds a gala dance at the home of Hishuru Tori, a rich Japanese ivory merchant (or, in the 1918 re-release, Haka Arakau, a rich Burmese ivory merchant). He is an elegant and dangerously sexy man, to whom Edith seems somewhat drawn; he shows her his roomful of treasures, and stamps one of them with a heated brand to show that it belongs to him.