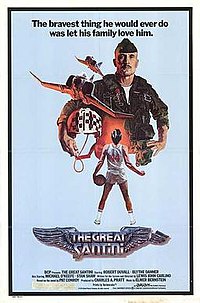 The Great Santini is a 1979 American drama film written and directed by Lewis John Carlino. It is based on the 1976 novel of the same name by Pat Conroy. The film stars Robert Duvall, Blythe Danner, and Michael O'Keefe.

A warrior without a war, Lt. Col. Wilbur "Bull" Meechum, a pilot also known as "the Great Santini" to his fellow Marines, moves his family to the military base town of Beaufort, South Carolina, in peacetime 1962. His wife Lillian is loyal and docile, tolerant of Meechum's temper and drinking. Their teenaged children, Ben and Mary Anne, are accustomed to his stern discipline and behave accordingly, while adapting to their new town and school.