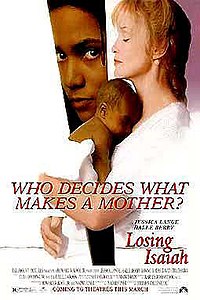 Losing Isaiah is a 1995 American drama film starring Jessica Lange and Halle Berry, directed by Stephen Gyllenhaal. It is based on the novel of the same name by Seth Margolis. The screenplay is written by Naomi Foner Gyllenhaal. The original music score is composed by Mark Isham.

While craving her next hit, Khaila Richards (Halle Berry), an African-American crack cocaine addict, abandons her infant illegitimate son, Isaiah, in the rubbish. She promises to "come back later", but then passes out from the drugs. The next day, the infant narrowly escapes death in the garbage truck. Baby Isaiah is sent to the hospital, where they discover he is also addicted to crack through his mother's addiction. While caring for Isaiah, a social worker named Margaret Lewin (Jessica Lange) grows increasingly fond of him and eventually adopts him to live with her and her husband, Charles (David Strathairn) and daughter, Hannah. Meanwhile, Khaila is caught shoplifting and is sent to rehab, unaware Isaiah is alive.