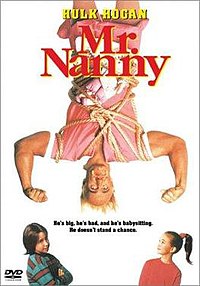 Mr. Nanny is a 1993 family American comedy film starring professional wrestler Hulk Hogan. The working title of the film was Rough Stuff, and David Johansen also recorded a song by that name for the film.

Sean Armstrong (Hulk Hogan) is a former wrestler living in Palm Beach, Florida and suffering from wrestler-days' nightmares. Burt Wilson (Sherman Hemsley), Sean's friend and former manager, has a bum leg from saving Sean's life and financial difficulties with his personal security business. With much whining and acting, Burt manages to persuade Sean to take a bodyguard job for Alex Mason Sr. (Austin Pendleton), the head of the prestigious tech firm, Mason Systems, which is developing a new anti-missile system, the Peacefinder Project. The vital information for this project is stored on a microchip. But it is neither the inventor nor the chip Sean has to guard - he is to look after the two Mason kids: Alex Jr. (Robert Gorman) and Kate (Madeline Zima).