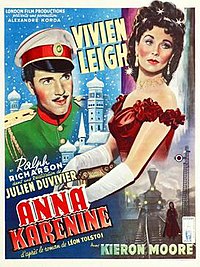 Anna Karenina is a 1948 British film based on the 1877 novel of the same title by the Russian author Leo Tolstoy.

Anna Karenina (Vivien Leigh) is married to Alexei Karenin (Ralph Richardson), a cold government official in St Petersburg who is apparently more interested in his career than in satisfying the emotional needs of his wife. Called to Moscow by her brother Stepan Oblonsky (Hugh Dempster), a reprobate who has been unfaithful to his trusting wife Dolly (Mary Kerridge) once too often, Anna meets Countess Vronsky (Helen Haye) on the night train. They discuss their sons, with the Countess showing Anna a picture of her son Count Vronsky (Kieron Moore), a cavalry officer.