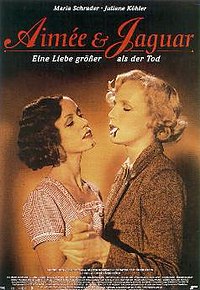 Aimée & Jaguar is a 1999 German drama film set in Berlin during World War II. It was written and directed by Max Färberböck and based on 's book chronicling the actual lives of Lilly Wust and Felice Schragenheim during that time. Before Erica Fischer's bestseller, Lilly Wust was tracked down by the American journalist, author, and noted Holocaust researcher Charles Brady, who considered Lilly Wust a Holocaust victim. It was over a year and a half, however, before Wust was able to confide in Brady and tell him her whole story. They remained close friends for 20 years until her death in 2006.

The film explores the lives of Felice Schragenheim (Maria Schrader), a Jewish woman who has assumed a false name and belongs to an underground organization, and Lilly Wust (Juliane Köhler), a married mother of four who is unsatisfied with her philandering Nazi officer husband.