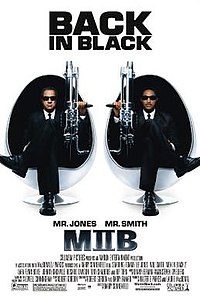 Men in Black II (stylized as MIIB) is a 2002 American science fiction action comedy film directed by Barry Sonnenfeld and written by Robert Gordon and Barry Fanaro. A sequel to Men in Black (1997), which in turn is loosely based on the Marvel Comics series The Men in Black by Lowell Cunningham, the film stars Tommy Lee Jones and Will Smith reprising their roles from the first film, with Lara Flynn Boyle, Johnny Knoxville, Rosario Dawson, Tony Shalhoub and Rip Torn in supporting roles. It was also the final appearance of Torn in the series (although he did make a brief uncredited appearance in Men in Black 3), as he died on July 9, 2019, about a month after MIB International was released.

In July 2002, Men in Black Agent J is called to investigate the murder of an alien, Ben, at his pizzeria. The waitress, Laura Vasquez, tells him that the murderers are Serleena, a shapeshifting, plant-like Kylothian who has taken the form of a Victoria's Secret lingerie model, and her two-headed servant Scrad and Charlie. Laura says they were looking for something called the Light of Zartha. J is strongly attracted to Laura, and in violation of MiB rules, does not neuralyze her to erase her memories.