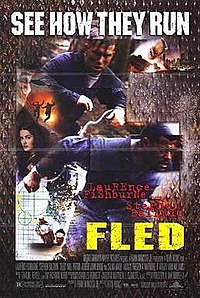 Fled is a 1996 American buddy action comedy film directed by Kevin Hooks. It stars Laurence Fishburne and Stephen Baldwin as two prisoners chained together who flee during an escape attempt gone bad.

An interrogator prepares a man to take the stand against mob boss Frank Matajano on an Air Force base. A driver delivers takeout, which is taken to the interrogation room. Once opened, it explodes, killing the witness. In court, a judge places court on recess until the Attorney General can bring sufficient evidence against Matajano. The Attorney General angrily demands a U.S. Marshal, Pat Schiller (Robert John Burke), get evidence in 72 hours to replace the killed witness.