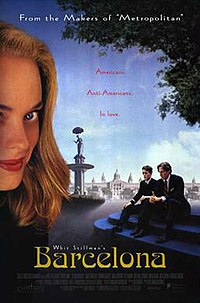 Barcelona is a 1994 American comedy-drama film written and directed by Whit Stillman and set in Barcelona. The film stars Taylor Nichols, Chris Eigeman and Mira Sorvino.

The main character in Barcelona is a Chicago salesman named Ted Boynton, who lives and works in the eponymous Spanish city in the early 1980s. Ted's cousin, Fred, a naval officer, unexpectedly comes to stay with Ted at the beginning of the film. Fred has been sent to Barcelona to handle public relations on behalf of a U.S. fleet scheduled to arrive later.