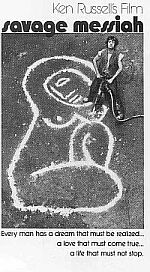 Savage Messiah is a 1972 British biographical film of the life of French sculptor Henri Gaudier-Brzeska, made by Russ-Arts and distributed by MGM. It was directed and produced by Ken Russell, with Harry Benn as associate producer, from a screenplay by Christopher Logue, based on the book Savage Messiah by H. S. Ede. Much of the content of Ede's book came from letters sent between Henri Gaudier-Brzeska and his lover Sophie Brzeska.