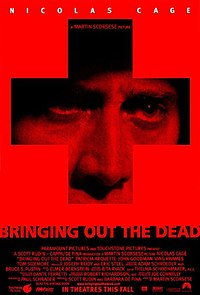 Bringing Out the Dead is a 1999 American psychological drama film directed by Martin Scorsese and written by Paul Schrader, based on the novel of the same name by Joe Connelly. It stars Nicolas Cage, Patricia Arquette, John Goodman, Ving Rhames, and Tom Sizemore. The plot depicts the life of a depressed New York City paramedic (Cage).

In Manhattan, paramedic Frank Pierce suffers from depression, insomnia, and occupational burnout having not saved any patients in months after botching the resuscitation of Rose, a homeless teen. He has begun to hallucinate Rose's ghost. One night, Frank and his partner Larry respond to a call by the family of Mr. Burke who has entered cardiac arrest. There, Frank befriends Burke's distraught daughter Mary, a former junkie, and discovers Mary was friends with Noel, a drug addict and delinquent who is frequently sent to the hospital.