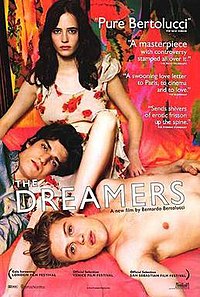 The Dreamers is a 2003 romantic drama film directed by Bernardo Bertolucci. The screenplay is by Gilbert Adair, based on his own novel The Holy Innocents. An international co-production by companies from France, the United Kingdom, and Italy, the film tells the story of an American university student in Paris who, after meeting a peculiar brother and sister who are fellow film enthusiasts, becomes entangled in an erotic triangle. It is set against the backdrop of the 1968 Paris student riots. The film makes several references to various movies of classical and French New Wave cinema, incorporating clips from films that are often imitated by the actors in particular scenes.

Matthew is an American exchange student who has come to Paris to study French. While at the Cinémathèque Française protesting the firing of Henri Langlois, he meets the free-spirited twins Théo and Isabelle. The three bond over a shared love of film.