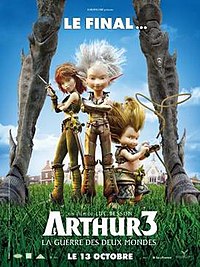 Arthur 3: The War of the Two Worlds (French: Arthur et la guerre des deux mondes, also known in North America as Arthur and the Invisibles 3 or simply Arthur 3) is a 2010 English-language French animated/live-action feature film co-written, co-produced and directed by Luc Besson, based on his novel of the same title and starring Freddie Highmore and the other actors that reprise for the movie. EuropaCorp produced the film, which is the third and final installment in Besson's Arthur series, following Arthur and the Invisibles and continuing Arthur and the Revenge of Maltazard, The film begins with nothing left to lose, Arthur must begin to grow back to his normal size and faces Maltazard in massive final battle as Maltazard threatens to take over the entire universe.

Picking up where we left off after the second film of the series, Maltazard has assumed human size, and left Arthur in miniature. Accompanied by Selenia and Betameche, Arthur attempts to retrieve an enlarging potion from his house, which Maltazard seizes to enlarge his followers, whereafter Arthur returns to human form using an Elixir of Life given by a queen bee. Archibald convinces Darkos, Maltazard's son, to change sides, and enlarges him with a second potion. Arthur and Darkos then confront Maltazard, until Selenia and Betameche shrink Maltazard back to his Minimoy size and Arthur captures him, while the U.S. Army overcome Maltazard's forces. Maltazard thereafter remains a prisoner of Arthur's family.