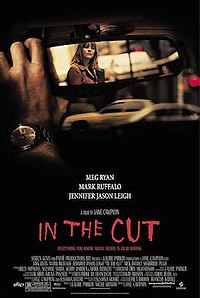 In the Cut is a 2003 psychological thriller film written and directed by Jane Campion and starring Meg Ryan, Mark Ruffalo, and Jennifer Jason Leigh. Campion's screenplay is an adaptation of the novel of the same name by Susanna Moore. The film focuses on an English teacher who becomes personally entangled with a detective investigating a series of gruesome murders in her Manhattan neighborhood.

Frannie Avery, an introverted writer and English teacher in New York City, meets one of her students, Cornelius, at a local pub to talk about their coursework. Cornelius propounds a theory that John Wayne Gacy may not have been guilty of his murderous crimes, later suggesting that 'desire' was responsible. During the meeting, she heads to the bathroom in the basement. In the darkened basement hallway, she witnesses a woman performing oral sex on a man. Stunned, she momentarily observes the scene but, due to the lack of light, is only able to discern a 3 of spades tattoo on the man's wrist. Periodically as she travels the subway, Frannie reads posters of poetic quotations in the carriages, which seem to have bearing on her own life story.