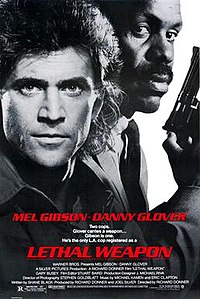 Lethal Weapon is a 1987 American buddy cop action film directed by Richard Donner, and produced by Joel Silver, and written by Shane Black. It stars Mel Gibson and Danny Glover alongside Gary Busey, Tom Atkins, Darlene Love, and Mitchell Ryan. In Lethal Weapon, a pair of mismatched LAPD detectives – Martin Riggs (Gibson), a former Green Beret who has become suicidal following the death of his wife, and Roger Murtaugh (Glover), a 50-year-old veteran of the force – work together as partners.

Shortly after his 50th birthday, LAPD Homicide Sergeant Roger Murtaugh is partnered with Sergeant Martin Riggs, a transfer from narcotics. Riggs, a former Special Forces soldier whose wife was killed in a car accident three years prior, has turned suicidal, and has been taking his aggression out on suspects, leading to his superiors requesting his transfer. Murtaugh and Riggs quickly find themselves facing off with each other.