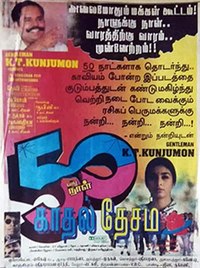 Kadhal Desam is a 1996 Indian Tamil-language action romance film written and directed by Kathir and produced by K. T. Kunjumon. The film starred Vineeth, Abbas, and Tabu in the lead roles, while S. P. Balasubrahmanyam, Vadivelu, Chinni Jayanth and Srividya played other pivotal characters. K. V. Anand was the cinematographer for the project and A. R. Rahman composed the film's soundtrack and score. The film opened in August 1996 to positive reviews from critics and became a box office success. It was also remade in Bangladesh as Narir Mon, starring Riaz, Shakil Khan and Shabnur respectively.

In the city of Chennai, a traditional rivalry has always existed between the students of Pachaiyappa's and Loyola colleges. Karthik (Vineeth) is a poor orphan who studies in Pachaiyappa's College, lives in a rented room, travels by the bus, hangs out with a number of friends, and is the captain of his football team. He is also a good poet and daydreams about his dream girl. Arun (Abbas), on the other hand, comes from a rich and wealthy family, studies in Loyola College, drives his own car, hangs out with numerous friends, and is also the captain of his football team. In a nasty intercollege riot, Arun saves Karthik's life. So in return, Karthik lets Arun win in a soccer game because he thinks Arun can't take losses easily. Arun realizes that the victory is because of Karthik's sacrifice.