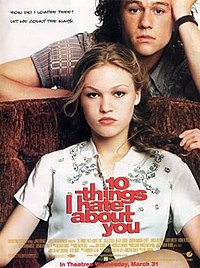 10 Things I Hate About You is a 1999 American romantic comedy film directed by Gil Junger and starring Julia Stiles, Heath Ledger, Joseph Gordon-Levitt, and Larisa Oleynik. The screenplay, written by Karen McCullah Lutz and Kirsten Smith, is a modernization of William Shakespeare's late-16th-century comedy The Taming of the Shrew, retold in a late-1990s American high school setting. In the story, new student Cameron (Gordon-Levitt) is smitten with Bianca (Oleynik) and, in order to get around her father's strict rules on dating, attempts to get bad boy Patrick (Ledger) to date Bianca's ill-tempered sister, Kat (Stiles). The film is titled after a poem written by Kat about her bittersweet romance with Patrick. Much of the filming took place in the Seattle metropolitan area, with many scenes shot at Stadium High School in Tacoma.

Cameron James, a new student at Padua High School in the Seattle area, becomes instantly smitten with popular sophomore Bianca Stratford. Geeky Michael Eckman warns him that Bianca is vapid and conceited, and that her overprotective father does not allow Bianca or her older sister, the shrewish Kat, to date. Kat, a senior, is accepted to Sarah Lawrence College in New York, but her father, Walter, wants her to stay close to home. Bianca wishes to date affluent senior Joey Donner, but Walter, an obstetrician worrisome of teenage pregnancy, will not allow his daughters to date until they graduate. Frustrated by Bianca's insistence and Kat's rebelliousness, Walter declares that Bianca may date only when Kat does, knowing that Kat's antisocial attitude makes this unlikely.