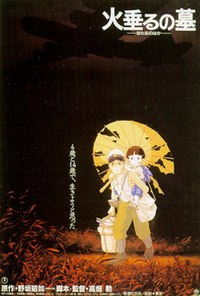 Grave of the Fireflies 1988

is a 1988 Japanese animated war tragedy film based on a 1967 short story by Akiyuki Nosaka. It was written and directed by Isao Takahata, and animated by Studio Ghibli for Shinchosha Publishing.

In Kobe, the spirits of young war orphans Seita and Setsuko Yokokawa reunite and board a ghostly train as they recount how they survived the Bombing of Kobe in World War II.