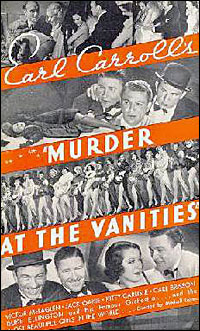 Murder at the Vanities 1934

Murder at the Vanities is a 1934 American Pre-Code musical film based on the 1933 Broadway show with music by Victor Young. It was released by Paramount Pictures. It was directed by Mitchell Leisen, stars Victor McLaglen, Carl Brisson, Jack Oakie, Kitty Carlisle, Gertrude Michael, Toby Wing, and Jessie Ralph. Duke Ellington and his Orchestra are featured in the elaborate finale number.

Jack Ellery (Oakie) is staging a lavish musical revue, starring Eric Lander (Brisson), Ann Ware (Carlisle), and Rita Ross (Michael), supported by a cast of a hundred background singers/dancers (almost all women, and many scantily clad) and two full orchestras. On opening night, just before the show, somebody tries to kill Ware several times. Ellery calls in police lieutenant Murdock (McLaglen) of the homicide squad to investigate. During the show a private detective and then Rita are murdered. Ellery hides this from the rest of the performers, claiming the victims are just sick, and talks Murdock into investigating while the revue continues on, otherwise Ellery will go broke.