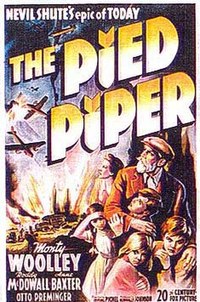 The Pied Piper is a 1942 American film in which an Englishman on vacation in France is caught up in the German invasion of that country, and finds himself taking an ever-growing group of children to safety. It stars Monty Woolley, Roddy McDowall and Anne Baxter. The film was adapted by Nunnally Johnson from the 1942 novel of the same name by Nevil Shute. It was directed by Irving Pichel.

In June 1940, Howard goes to France, near the border with Switzerland, to sulk after his offer to serve in the Second World War is turned down by every government department in London because he is too old. (It is later revealed that his son, an RAF pilot, was shot down and killed two months earlier.) When Germany invades France, he is determined to go home. Mrs. Cavanaugh decides to accompany her husband, a League of Nations official, to his post in Geneva, but fearing that the Germans will invade Switzerland next, she asks Howard to take her two young children, Ronnie and Sheila, to her sister in Plymouth. Howard reluctantly agrees, as he does not like children, especially Ronnie, who annoys him by contradicting his claim that Rochester is an American state.