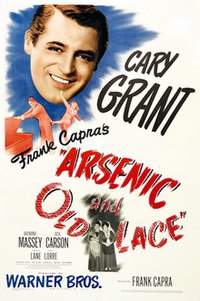 Arsenic and Old Lace is a 1944 American black comedy film directed by Frank Capra and starring Cary Grant. It was based on Joseph Kesselring's 1941 play, Arsenic and Old Lace. The script adaptation was written by Julius J. Epstein and Philip G. Epstein. The contract with the play’s producers stipulated that the film would not be released until the Broadway run ended. The original planned release date was September 30, 1942. The play was a tremendous hit, running for three and a half years, so the film was not released until 1944. The lead role of Mortimer Brewster was originally intended for Bob Hope, but he could not be released from his contract with Paramount Pictures. Capra had also approached Jack Benny and Richard Travis before learning that Grant would accept the role. On the Broadway stage, Boris Karloff played Jonathan Brewster, who is said to "look like Boris Karloff". According to TCM, Karloff, who gave permission for the use of his name in the film, remained in the play to appease the producers, who were afraid of what stripping the play of all its primary cast would do to ticket sales. Raymond Massey took Karloff’s place on screen. The film's supporting cast also features Priscilla Lane, Jack Carson, Edward Everett Horton, and Peter Lorre.

The Brewster family of Brooklyn, New York, is descended from Mayflower settlers. Several illustrious forebears' portraits line the walls of the ancestral home.