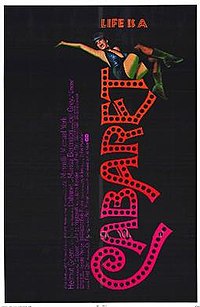 In 1931 Berlin, young American Sally Bowles performs at the Kit Kat Klub. A new British arrival in the city, Brian Roberts, moves into the boarding house where Sally lives. A reserved academic and writer, Brian wants to give English lessons to earn a living while completing his doctorate. Sally tries to seduce Brian, but he tells her that on three previous occasions he has tried to have sexual relationships with women, all of which failed. They become friends, and Brian witnesses Sally's bohemian life in the last days of the Weimar Republic. When Brian consoles Sally after her father cancels his meeting with her, they become lovers, concluding that his previous failures with women were because they were "the wrong three girls".