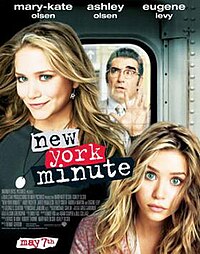 New York Minute is a 2004 American comedy film starring Mary-Kate Olsen, Ashley Olsen, and Eugene Levy, while Andy Richter, Jared Padalecki, Riley Smith, Andrea Martin, and Bob Saget are featured in supporting roles. It was directed by Dennie Gordon and released on May 7, 2004. In the film, Mary-Kate and Ashley play twins with opposing personalities who have a series of adventures around New York City. New York Minute reunited Mary-Kate and Ashley with Saget since they all starred together on the ABC original TV series Full House, which ran from 1987 to 1995. It was the Olsen twins' second theatrical film release after 1995's It Takes Two. The film received generally negative reviews from critics and was a box office bomb. Because of this, it is the last film featuring both Olsens to date. It was also the last film released by Dualstar Entertainment before it went into dormancy.

Seventeen-year-old identical twin sisters Jane (Ashley Olsen) and Roxy Ryan (Mary-Kate Olsen) are completely different and never see eye to eye. They live with their widower father, and attend the fictional Atta Westland Grove High Van School in Syosset, a suburban Long Island town. Over a 24-hour period, the two begrudgingly journey together into the city for Jane, an uptight overachiever, to deliver a speech to qualify for a prestigious college scholarship abroad, and for Roxy, a laid-back punk-rock rebel, to get backstage at a music video shoot so that she can give her demo tape to the group.