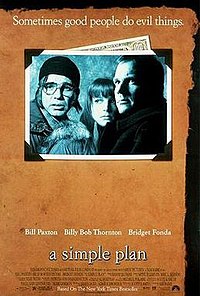 A Simple Plan is a 1998 neo-noir crime thriller film directed by Sam Raimi and written by Scott B. Smith, based on Smith's 1993 novel of the same name. The film stars Bill Paxton, Billy Bob Thornton, and Bridget Fonda. Set in rural Minnesota, the story follows brothers Hank (Paxton) and Jacob Mitchell (Thornton), who, along with Jacob's friend Lou (Brent Briscoe), discover a crashed plane containing $4.4 million in cash. The three men and Hank's wife Sarah (Fonda) go to great lengths to keep the money a secret but begin to doubt each other's trust, resulting in lies, deceit and murder.

Hank Mitchell and his pregnant wife Sarah live in rural Minnesota. One of the town's few college graduates, Hank works in a feed mill, while Sarah is a librarian. When Hank, his older, socially challenged brother Jacob and Jacob's friend Lou Chambers chase a fox into the woods, they stumble upon a crashed airplane. Hank decides to look inside the plane where he discovers a dead pilot and a bag containing $4.4 million in $100 bills. He suggests turning the money in, but Lou and Jacob persuade him not to. Hank then proposes that he keep the money safe at his house until the end of winter. Sheriff Carl Jenkins drives by the area and notices the three men after they hide the money in Jacob's pick-up truck. At Lou's suggestion, Jacob mentions hearing a plane in the area in an attempt to avoid suspicion. After Sheriff Carl leaves, the three men decide to keep the money a secret, but Hank breaks the pact when he immediately reveals the discovery to Sarah.