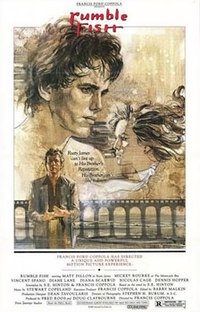 Rumble Fish is a 1983 American drama film directed by Francis Ford Coppola. It is based on the novel Rumble Fish by S. E. Hinton, who also co-wrote the screenplay with Coppola. The film stars Matt Dillon and Mickey Rourke.

Set in Tulsa, Oklahoma, the film begins in a diner called Bennys Billiards, where local tough guy Rusty James is told by Midget that rival group leader Biff Wilcox wants to meet him that night in an abandoned garage lot for a fight. Accepting the challenge, Rusty James then talks with his friends— the wily Smokey, loyal B.J., and tall, nerdy Steve - who all have a different take on the forthcoming fight. Steve mentions that Rusty James' older brother, "The Motorcycle Boy," would not be pleased with the fight as he had previously created a truce forbidding gang fights, or "rumbles." Rusty James dismisses him, saying that the Motorcycle Boy (whose real name is never revealed) has been gone for two months, leaving without explanation or promise of return.