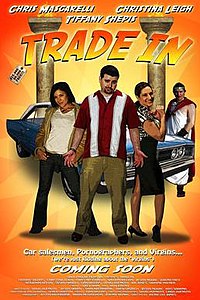 Trade In is a 2009 comedy film in post production, directed by Jackie Lee James. The film was written by Jason Moore, Kris Sharma and Drew Grubich. The film stars Chris Mascarelli, Tiffany Shepis, and Christina Leigh.

Marty (Mascarelli), owner of the used car dealership Car Kingdom, is thrust into a sales contest against his bitter rival, Wayne Empire (Joe Jones) of Empire Cars. Desperate, Marty hires his ex-girlfriend, Gina (Leigh), as a marketing rep. Together, they work to focus Marty's misfit sales team and turn them into the top dealership in town. It is a battle of wits and bumbling whim to determine who gets to stay open, and who gets traded in.