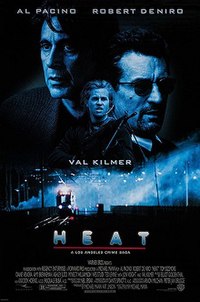 Heat is a 1995 American crime drama film written, produced, and directed by Michael Mann, starring Al Pacino, Robert De Niro, and Val Kilmer. De Niro plays Neil McCauley, a seasoned professional robber and Pacino plays Lt. Vincent Hanna, an LAPD robbery-homicide detective tracking down Neil's crew after a botched heist leaves three security guards dead. The story is based on the former Chicago police officer Chuck Adamson's pursuit during the 1960s of a criminal named McCauley, after whom De Niro's character is named. Heat is a remake by Mann of an unproduced television series he had worked on, the pilot of which was released as the TV movie L.A. Takedown in 1989.

Los Angeles professional thief Neil McCauley lives by a personal code: have nothing in your life you cannot leave behind if you need to escape the police. He and his crew – right hand man and closest ally Chris Shiherlis, enforcer Michael Cheritto and Trejo – hire Waingro to help rob $1.6 million in bearer bonds from an armored car. During the heist, Waingro impulsively kills a guard. A second guard is shot when he attempts to pull his concealed weapon. Since they are now all guilty of felony murder, McCauley gives the order to execute the remaining guard so as not to leave an eyewitness. McCauley is incensed with Waingro for the needless escalation, and the crew prepares to kill him, but the execution is interrupted by a passing police cruiser, and Waingro escapes.