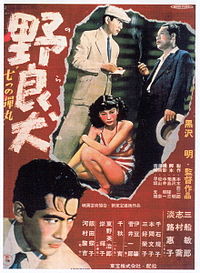 is a 1949 Japanese crime drama film noir directed by Akira Kurosawa and starring Toshiro Mifune and Takashi Shimura. It was Kurosawa's second film of 1949 produced by Film Art Association and released by Shintoho. It is also received as a detective movie (among the first of Japanese films in that genre) that explores the mood of Japan during its painful postwar recovery. The film is considered a precursor to the contemporary police procedural and buddy cop film genres.

The film takes place during a heatwave in the middle of summer in post-war Tokyo. Rookie homicide detective Murakami (Toshiro Mifune) has his Colt pistol stolen in a crowded trolley ride. He chases the pickpocket, but loses him. Remorsefully, Murakami reports the theft at headquarters. After some preliminary investigation, he then goes undercover in the city's backstreets for days, trying to infiltrate the illicit arms market. Murakami eventually picks up the trail of a gun racket.