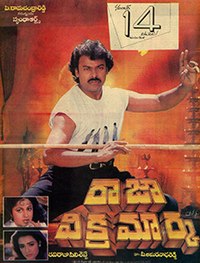 Raja Vikramarka is a 1990 Telugu film. It was directed by Ravi Raja Pinisetty. Chiranjeevi, Amala and Raadhika played the lead roles. The film was later dubbed into Hindi as Daulat Ki Duniya and into Tamil as Sathyama Naan Kaavalkaaran. The movie is a remake of Tamil film My Dear Marthandan which itself was based on the popular 1988 release Coming to America.

Raja Vikramarka (Chiranjeevi) is the prince of Skanda Dweepam, a small kingdom. As he is a prince, he is not allowed to live his own free life. His father Raja Bhupathi (Satyanarayana) arranges his marriage with another kingdom's princess. She turns out to be nothing more than a sycophant, one without a brain or spine of her own. Vikramarka leaves the kingdom along with his trusted friend, Jockie (Bramhanandam) in order to live his own life. In the modern big city, he finds a friend and works as a mechanic, during which time he saves Rekha (Amala) from two attempts on her life. Her uncle Vishwanatham (Raogopal Rao) hires him as her bodyguard. Vishwanatham later reveals to him that he was in fact the assassin trying to kill her for her money. In order to thwart his plot, Vikramarka agrees to handle the murder attempts, while at the same time trying to save her. After being kicked out of the house, Vishwanatham, along with Kanaka Rao (Gollapudi Maruthi Rao) and Raja Kotappa (Kota Srinivasa Rao) join forces to kill Vikramarka and his parents. Vikramarka saves the day and rules as king of his land.