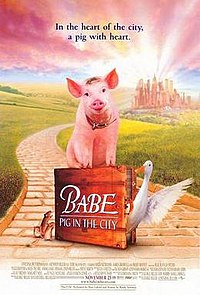 Babe: Pig in the City is a 1998 Australian-American comedy-drama film and the sequel to the 1995 film Babe. It is co-written, produced and directed by George Miller, who co-wrote and produced the original film. Most of the actors from the first film reappeared as their respective roles, including James Cromwell, Miriam Margolyes, Hugo Weaving, Danny Mann, Roscoe Lee Browne and Magda Szubanski with newcomers featuring Glenne Headly, Steven Wright, James Cosmo, Myles Jeffrey, and Mickey Rooney. However, most of them have only brief appearances, as the story focuses on the journey of Babe and Arthur Hoggett's wife Esme in the fictional city of Metropolis and Elizabeth Daily replaces Christine Cavanaugh as Babe.

Months after the events of the first film, Babe and his master, Arthur Hoggett, are given a welcome home parade after Babe's success as a "sheepdog". One day, Babe inadvertently causes an accident and Arthur is severely injured. His wife, Esme, is unsuccessful tending the farm alone.