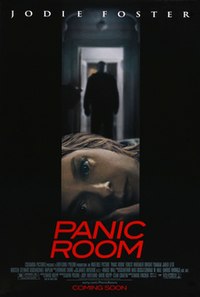 Panic Room is a 2002 American thriller film directed by David Fincher. The film stars Jodie Foster and Kristen Stewart as a mother and daughter whose new home is invaded by burglars, played by Forest Whitaker, Jared Leto, and Dwight Yoakam. The script was written by David Koepp.

Recently divorced Meg Altman, and her eleven-year-old daughter, Sarah, move into a four-story brownstone in New York City's Upper West Side. The house's previous owner, a reclusive millionaire, installed a "panic room" to protect the occupants from intruders. The room is protected by concrete and steel on all sides and a thick steel door and has an extensive security system with multiple surveillance cameras, a public address (P.A.) system, and a separate phone line. On the night the two move into the house, Junior, the previous owner's grandson; Burnham, an employee of the residence's security company; and Raoul, a vicious hitman Junior recruited, break in. They are after $3million in bearer bonds locked inside a floor safe in the panic room.