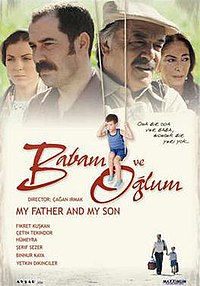 My Father and My Son is a 2005 Turkish drama film written and directed by Çağan Irmak about a family torn apart by the 1980 Turkish coup d'état. The film which went on nationwide release on became one of the highest-grossing Turkish films in history.

In order to study journalism at Istanbul University, Sadık leaves his village on the Aegean coast. This angers his father, Hüseyin, who wants him to study Agricultural Engineering so he can manage the family farm. During his years at university Sadık becomes a militant in left wing politics. Upon learning about Sadık's behavior, Hüseyin disowns him.