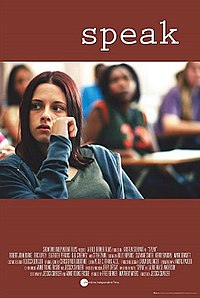 Speak is a 2004 American independent coming-of-age teen drama film based on the award-winning 1999 novel of the same name by Laurie Halse Anderson. It stars Kristen Stewart as Melinda Sordino, a high school freshman who practically stops talking after a senior student rapes her. The film is told through Melinda's eyes and is wrought with her sardonic humor and blunt honesty. It was broadcast on Showtime and Lifetime in 2005 after premiering at the Sundance Film Festival in 2004.

Fourteen-year-old Melinda Sordino begins her freshman year in high school and struggles on the first day. She doesn't have any friends to hang out with, and appears awkward and uncomfortable when speaking to others. Throughout the day, she is made fun of by several students, repeatedly called a "squealer". A series of flashbacks reveal that she called the police to a house party during the previous summer. Her actual reason for calling 9-1-1 was that she'd been raped by a senior student at the party, Andy Evans, but her trauma prevented her from reporting the rape over the telephone or when the police arrived.