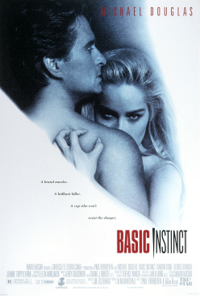 In San Francisco, homicide detective Nick Curran investigates the murder of retired rock star Johnny Boz, who has been stabbed to death with an ice pick during sex with a mysterious blonde woman. Nick's only suspect is Boz's girlfriend, crime novelist Catherine Tramell, who has written a novel that mirrors the crime. It is concluded that either Catherine is the murderer or someone is attempting to frame her. Catherine is uncooperative and taunting during the investigation, smoking and exposing herself during her interrogation. She passes a lie detector test and is released. Nick discovers Catherine has a history of befriending murderers, including her girlfriend Roxy, who impulsively killed her two younger brothers when she was 16 years of age, and Hazel Dobkins, who killed her husband and children for no apparent reason.