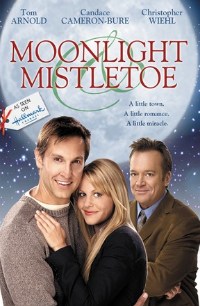 Moonlight and Mistletoe is a 2008 Christmas television film directed by Karen Arthur.

Holly Crosby (Candace Cameron Bure) is the daughter of Nick Crosby (Tom Arnold), the owner of Santaville, an amusement park focusing on Christmas, open 365 days a year. Fed up with being second fiddle to her father, who is devoted to the amusement park with all of his heart and soul, she leaves him in her teenage years. Years later, she is a successful businesswoman in the big city who is devoted to her work, but she does not have a social life. A few weeks before Christmas, she receives a call from Peter (Christopher Wiehl), her father's employee, informing her he was injured in a sleighing accident. Although she is estranged from her father, she immediately packs her bags and heads back to Santaville.